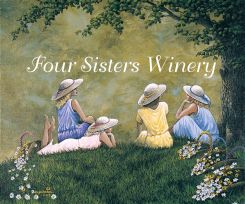 Special Events on the Deck

Stock up on your Favorite Wines - Special Discounts Apply

Tuesdays remind us that we are thankful for coffee and WINE! We hope that you have all the necessities to get through the day! ☕️🍷We are CLOSED today but reopen Thursday from 10-5. We hope to see you then! www.foursisterswinery.com908-475-3671 ... See MoreSee Less
View on Facebook
· Share

It's not too early to think about Valentine's Day. Call or visit the winery for this is other gift ideas. 908-475-3671foursisterswinery.com#valentines#ValentinesDay2021#valentinesgift#valentinespecial#winetating#winelover#wine#ILOVEYOU ... See MoreSee Less
View on Facebook
· Share

Special Events on the Deck

Musical entertainment by Rave On Band featuring Chris Roselle, a Garden State Native whose authentic interpretations of pop and rock ‘n roll music from 60’s, 70’s and 80’s will have you singing along! Also a seasoned ‘song-smith’ in his own right, he’s also released multiple album projects comprised of his own works… productions that clearly show the impact that this ‘influence-of-the-times’ projected upon him!