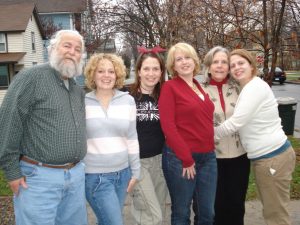 The girls with Mom and Dad

Matty and Laurie Matarazzo opened the winery in 1984 and planted their first vines in 1981. They were looking to invest for the future needs of their four daughters and the winery idea seemed like a perfect fit. For the first 8 years Laurie served as the winemaker while Matty handled the vineyards, harvest, and marketing. Matty was also responsible for their 350 acres of fruits and vegetables while Laurie maintained sanity in the home while caring for their four young daughters.

After 8 years Laurie decided it was time to take a break and tried to retire. A year later she took an off the farm job at Blair Academy where she eventually became the Director of Planned Giving and worked on a major capital campaign. During this period of time new winemakers had been trained to handle the day to day operations of the winemaking process and Matty became the official winemaker.

In the late 90’s, Laurie, whose father had been an Episcopal Priest, felt the call and began her process of becoming ordained. She was ordained in 2003 and served as the Associate rector at Calvary Episcopal Church in Summit, NJ where she had been serving for the past 5 years. Laurie has now returned to the farm full time and is involved in two local churches where she serves as their priest.

Matty, who spends most of his days on the farm, is now the official wine maker, chef and marketing director at the winery.

Matty was elected to the State Board of Agriculture where he served a 4 year term that started in July of 2005.

The winery has been for sale and Matty is hoping that a new young family will someday come along and continue the tration. Matty and Laurie intend to stay on the remainder of the farm and continue to cultivate the pumpkin fields and apple orchards for years to come.

They will also be available to assist any new owners with the tools needed to run a successful winery.